As feared i didn't make it out on Sunday morning for the long run  after a big night on the Saturday evening , so was back out early today and decided on the regular 2 x Woollarha Hill 6k loops around the park. Felt pretty ordinary for the first 2ks but was moving OK once I'd warmed up.
Come around for the first 6ks in 26.43 (ave 4.27s) before stepping it up on the 2nd lap, started to feel the pace a little going up the hill but hung in there with a 25.10 second lap at 4.11 average.
12ks in total for the morning in 51.54 ( average 4.19s)

Lunchtime saw the team head to our 4th different pool venue in as many weeks with (at last) the opening of the new pool down at Prince Alfred Park near Central Station. They are offering FREE swims till October to thank the public for their patience during construction. It meant it saw Champagne Charlie who is never far away from a freebie and the chance of a glass of Bubbly in attendance, as was Pete, Angus, MrAce, Dave, Warwick and Champ.
After a 300 warm up the set was 5 x 200, and 8 x 100s
Was lucky enough to have the pool pretty much to ourselves, and happy to report it got the thumbs up - nice and warm , very clean and great to be outdoors even at this time of the year.
Was mobbed by all the paparazzi for photos at the start and the HuRTS boys were only to happy to oblige, i was even confronted by Lord Mayor and Councillor Clover Moore (complete with her Dog Collar) wanting more information on the HuRTs team and asking if she could help with any training facilities going forward? 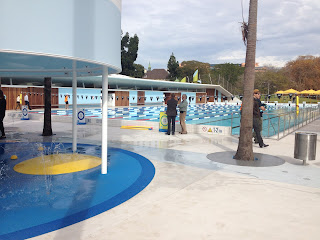 The new pool down at Prince Alfred on the Park - finally opens 2 years after it was supposed to. 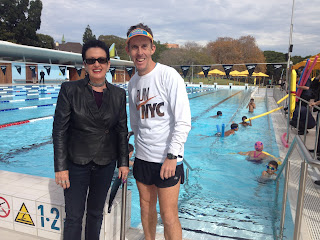 At the opening with 'Clover' she wants to join the HuRTS team but i told her she may have to lose the Dog Collar if she wants her membership.


A massive weekend in footy from back home, happy to report that both Villa and Newcastle managed to survive the dreaded drop ( for another 12 months at least) and great to see Wigan turn moneybags Man City over in the F.A Cup on Saturday 1 -0. Stoke lost out to a late goal against Spurs and in turn Chairman Tommy H is all excited that his 'Toon' may finish above the mighty Potters ........It's all down to the last game.
Most dramatic action took place in the Championship game though between Watford and Leicester - Leicester getting a penalty last minute only to miss that then saw Watford go up the other end and score that took them into the final play off game against either Slim Sammy Agnew's Palace or Brighton to secure a place in the premier - Check it out if you haven't seen it, well worth seeing :)


Also received my British Lions top in the post on Friday for the upcoming tour to Brissy on the 22nd June, can't wait for this one and especially looking forward to being part of the masses that hit Aussie in support of the team where it will be like 'Spot the Aussie' in the crowd. 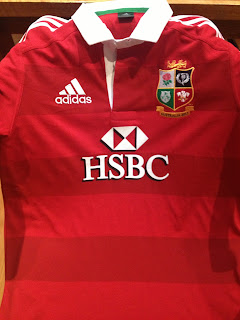 All set for the upcoming tour of the Lions - 22nd June first test in Brissy.

Tim
Pommy living in Oz for 21 years now, Still loving all sports especially my football, and loves bagging the Aussies when it comes to the cricket. Still trying to be competitive on the running front and hopefully can hold some of these younger guys at bay for a while longer. Looking at bringing my marathon time down to sub 2.45 and another shot at sub 50 mins for City to Surf?

Up and Coming Races


View my web site for all coming event